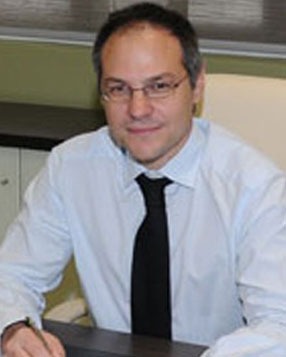 Dr. Nikos Apostolopoulos is an Obstetrician-Gynecologist.

He graduated from the Medical School of Thessaloniki in 1999 and in 2001 he began his specialization in Obstetrics-Gynecology in England.

In 2007 he specialized in Obstetrics-Gynecology, excelling in the examinations and became a member of the Royal College of Obstetricians and Gynecologists of Britain (MRCOG).

From 2007 to 2010 he worked as a curator at Homerton and Queen’s University Hospitals in London.

At the same time, he specialized in laparoscopic and hysteroscopic surgery, in the treatment of reproductive problems, of complications of early pregnancy and miscarriage, in colposcopy and in high-risk pregnancy.

In 2010 he became director of Queen’s University Hospital in London in the Department of Endoscopic Surgery and Reproductive Surgery.

He also completed a Master of Science (MSc) degree in Endoscopic Surgery at the University of Surrey in the UK. His paper in Laparoscopic Urogynecology received the highest grade ever awarded and was honored by the Rector's Office.

He is certified by the British Medical Association and the Royal College of Obstetricians and Gynecologists of Britain in Obstetrics-Gynecology (Certification of Completion of Training, CCT).

In 2011 he returned to Greece. He is married and has three children.

You can find out more about which cookies we are using or switch them off in settings.

This website uses cookies so that we can provide you with the best user experience possible. Cookie information is stored in your browser and performs functions such as recognising you when you return to our website and helping our team to understand which sections of the website you find most interesting and useful.

Strictly Necessary Cookie should be enabled at all times so that we can save your preferences for cookie settings.

If you disable this cookie, we will not be able to save your preferences. This means that every time you visit this website you will need to enable or disable cookies again.

This website uses Google Analytics to collect anonymous information such as the number of visitors to the site, and the most popular pages.

Please enable Strictly Necessary Cookies first so that we can save your preferences!